Zeiselmauer, the Roman Cannabiaca, was the most eastern fort at the Danube Limes of the province of Noricum. It was part of a chain of military camps along the Danube which constituted the northern frontier of the Roman Empire for almost 500 years. A mixed auxiliary force of 500 mounted and infantry soldiers was based here. Since the 1st century several construction phases have been documented, the most significant one in the 4th century when a substantial reinforcement of the fortifications led to monumental buildings, three of which are still preserved: The Fortlet, the Fan- shaped Tower and the Granary. They still are characteristic for the centre of the village. The remains of the Roman Sanctuary are kept under the parish church.

After the disintegration of the Western Roman Empire in the 5th century, the camp was abandoned. Its rectangular layout is still reflected by the shape of the present Church Square. Zeiselmauer / Cannabiaca is one of the best preserved and well documented Roman camps along the Austrian Danube Limes.

For a walk which preferably starts from 1. Church Square follow the signpost “Römerrundgang” (Roman Walk). Sign-boards with information in German and English are placed on the lawn in front of the “Raiffeisenkasse” as well as at each of the following stations. As indicated on the map, follow the way from “Kirchenplatz“ (Church Square) to “Florianiplatz“ (Florian‘s Square). On the right the building protruding to the side-walk indicates the place of the former western gate (Porta Principalis Sinistra). Just after turning to “Augasse“ on the right hand side you will see the (2) Fortlet-Burgus. Again to the right “Römergasse“ leads to the (3) Fan-shaped Tower (Fächerturm). From there a footpath to the right leads to the (4) Granary (Körnerkasten) and back to the Church with the (5) Crypt - Sanctuary of the Flags (Unterkirche mit Fahnenheiligtum). The Municipal Office is a 5-minute walk from the Church Square, and provides the (6) Roman Showroom (Römischer Schauraum), an exhibition of remarkable Roman finds from Zeiselmauer.

The Roman Walk (about 500 meters) is freely accessible and easy to walk.

Due to the reduction of the military forces in the 2nd half of the 4th century, the former military camp was handed over to the civilian population in need of protection. For the remaining number of troops the Burgus, a small fortlet at the north-western edge of the camp, was erected. It had room for about 50 men. 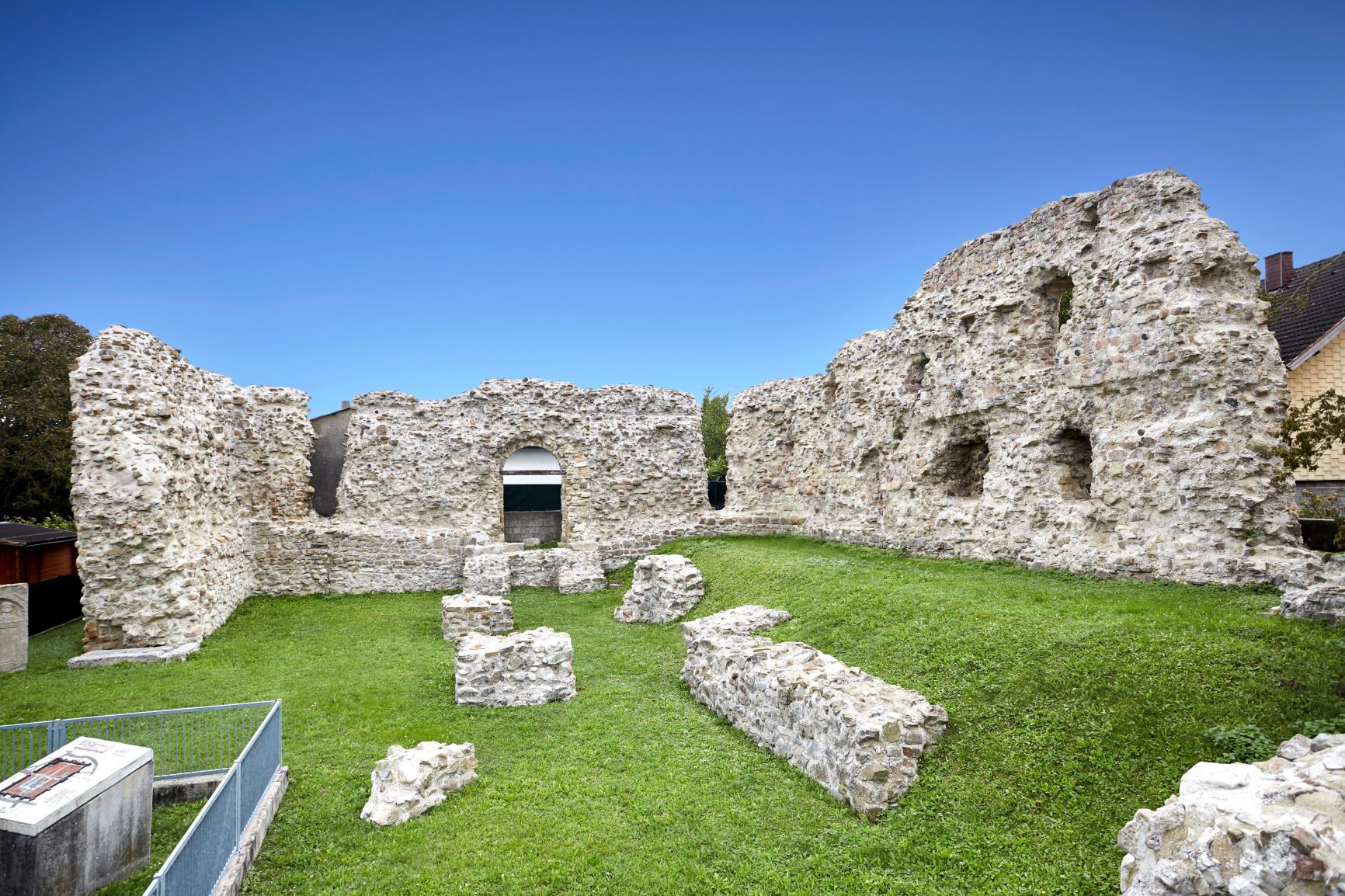 The 20- to 21-meter building was accessible from the camp’s side only through a gate which has recently been restored. The walls, at the base 1,9-meter strong, narrow from each of the two storeys to the next. They consist of a mixture of mortar and cracked stones (“Roman concrete” / Opus caementitium) with an outer coat of large squared blocks. Towards the interior, the core of the wall lies bare due to the looting of the coating stones in the course of time. Only the base of the western wall, which until excavated was below ground level, shows part of the inner coat of stones layed in herring- bone pattern (opus spicatum). 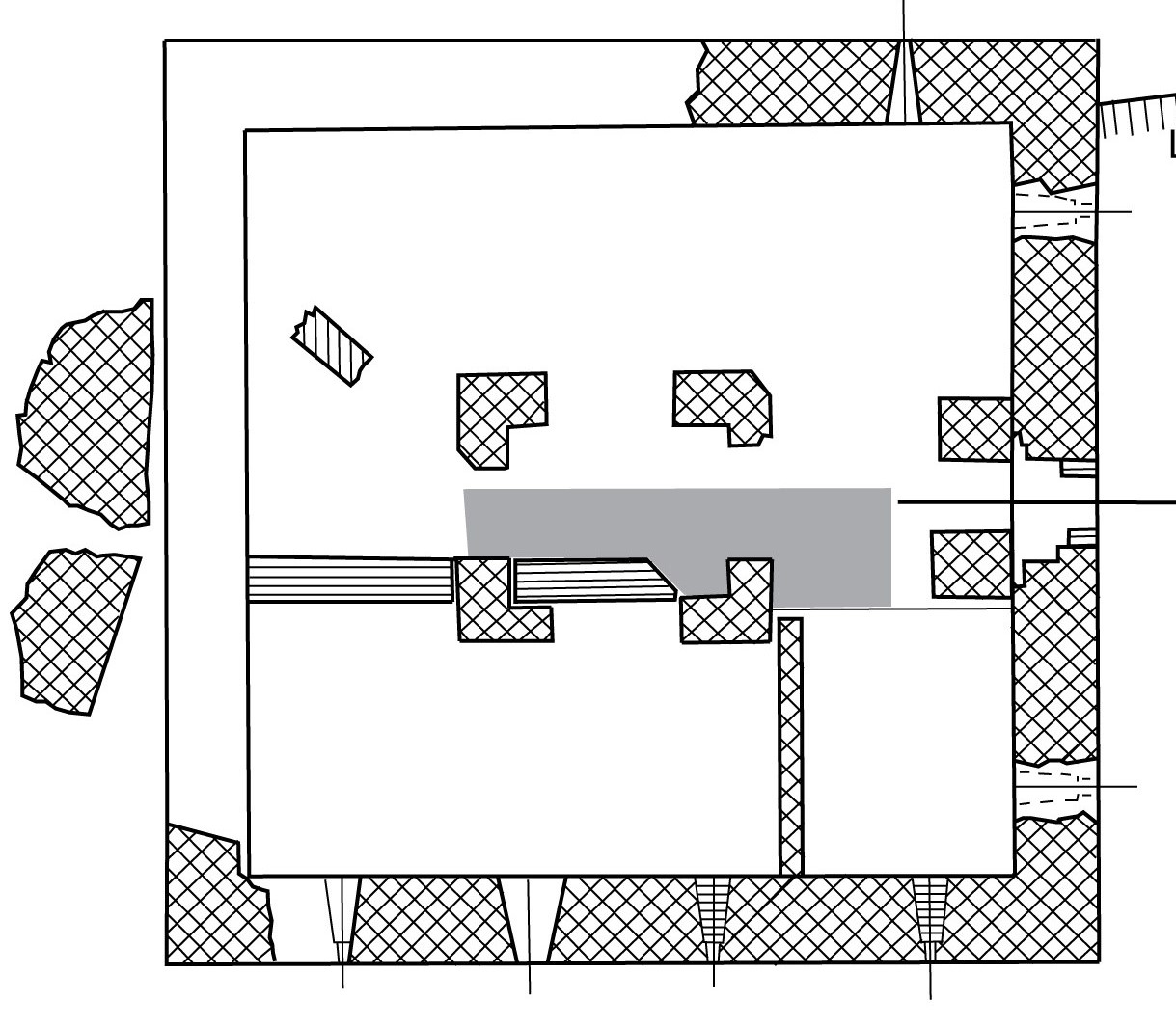 In contrast to the massive outer walls the inner construction was made of wood only. The four hook- shaped foundations in the centre surrounded a small inner yard and bore wooden pillars, which supported the intermediate wooden ceilings and the tiled roof.

In the foreground remain parts of the western wall, which collapsed already in Late Antiquity, probably due to an earth quake or washing out by floods.

Virtual Reconstruction of the Burgus 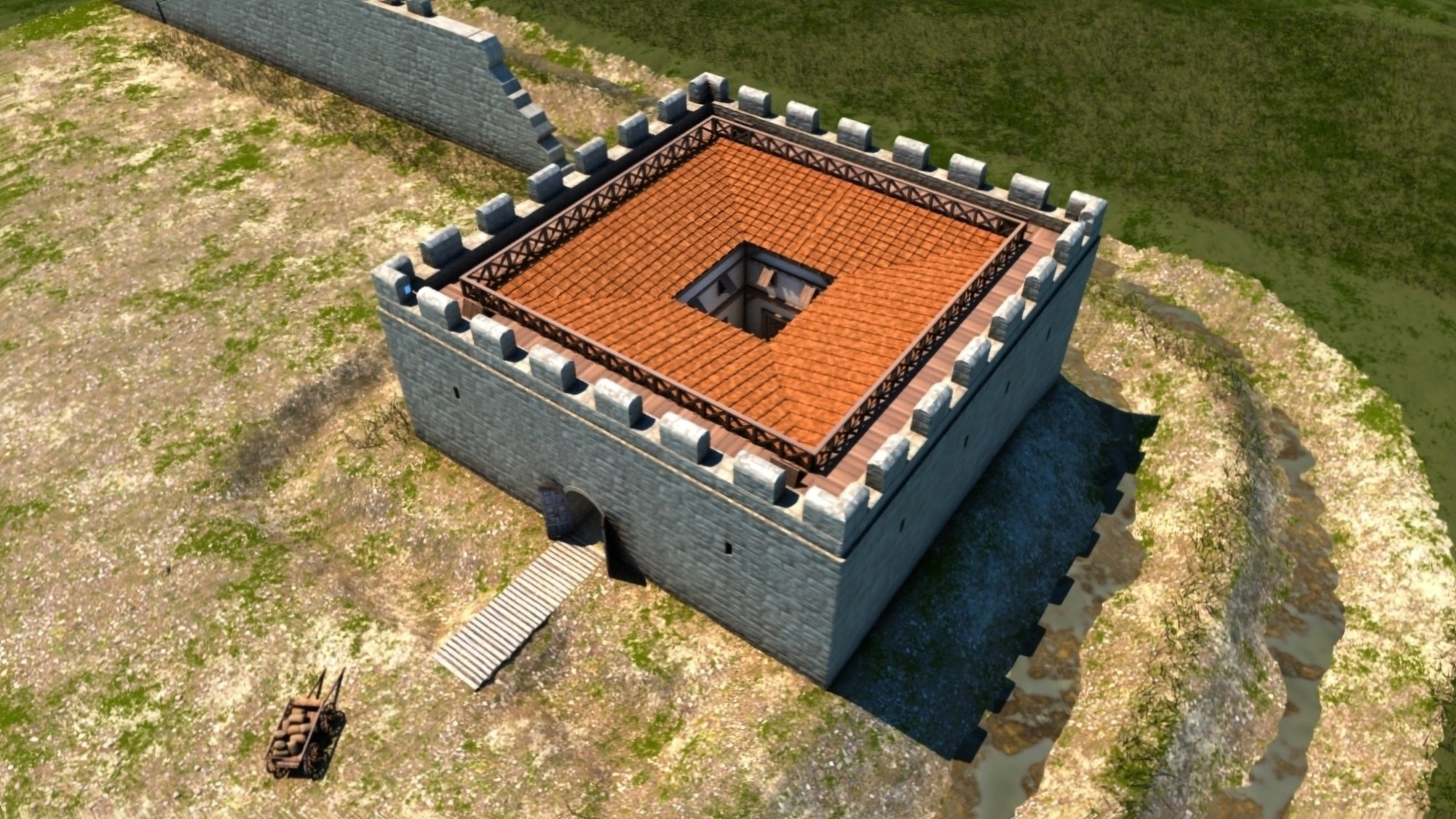 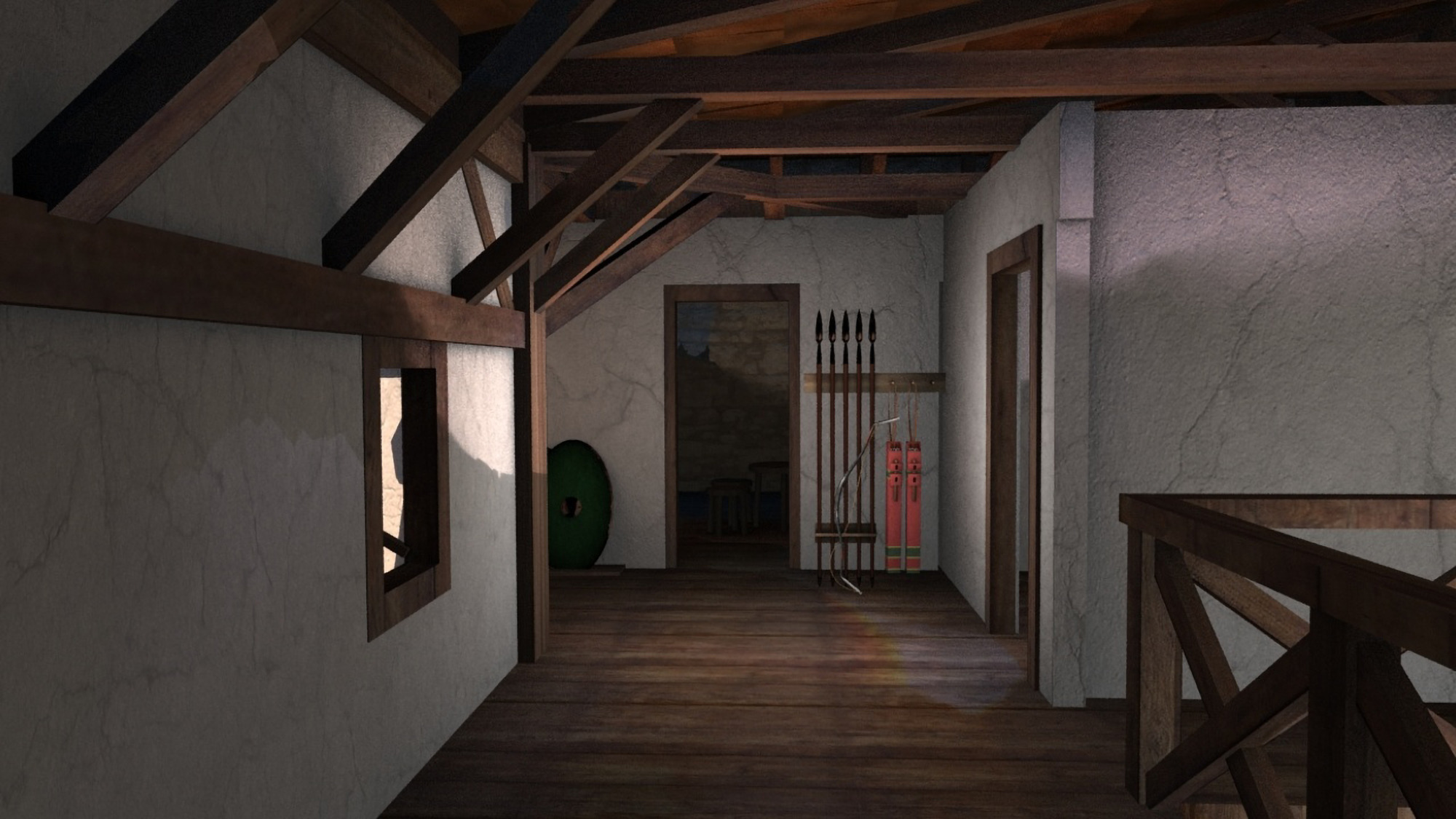 Until the 1970ies the actually open interior of the building was blocked up by some small old houses. They were removed and subsequent examination of the walls proved their late Roman origin in contrast to their medieval provenience assumed so far. The walls were restored and secured. Some reused stone objects could be recovered, e.g. the important Dedication Stone (“Weihestein”) and the grave stone of “Aelius Aemilius”. Both are now kept in the Roman Showroom in the Municipal Office. A copy of the grave stone has been placed next to the Burgus.

The Burgus of Zeiselmauer with its inner yard is the only building of that type in Austria and therefore unique. The closest example with comparable characteristics can be found along the Serbian Danube only. At the beginning of the 4th century the fortifications were substantially reinforced primarily by massive towers at the flanks (horseshoe towers) and at the edges of the camp (fan-shaped towers). In Zeiselmauer the only one of those being left is situated at the north-eastern edge of the camp in “Römergasse”. Because of its fan-shaped layout it protruded from the camp‘s wall and thus enabled the defenders to make better use of their arms against attacking enemies. The original height of the tower was 9 meters, of which looming walls are still preserved. In the southern part of the building, the link to the camp’s wall can still be seen. The holes used for the scaffolding date back to the construction time and after restoration have been marked by wooden poles.

This fan-shaped tower is of eminent importance because it is the only free standing construction of that type preserved in Austria. In neighboring countries there are no comparable examples of a remaining construction volume like this either. It is the oldest late Roman building in Zeiselmauer. The massive building was erected in the 2nd half of the 4th century in the same period as the Burgus. It replaced the former eastern camp gate (Porta Principalis Dextra). It is commonly characterized as a box-shaped gate, although it is not clear whether in the late Roman period it still served as a gate or simply as a protective edifice. Up to the roof the walls are of late Roman origin with later repairs. The narrow gap windows go back to the construction time, the larger ones as well as the door on the left side are of recent origin. The carefully rounded edges are characteristic style-elements. On the front- wall towards the camp a massive transverse arch can be seen, the inner arch of the former eastern gate. Only the upper part is visible because of two meters of earth filling. The exceptionally good state of preservation is due to the fact that for centuries is was used as a granary (“Körnerkasten”) and therefore was well maintained and continuously protected by a roof. For a long time the building was considered to be medieval according to the date 1581 engraved in the small door arch, in fact this was the year this door was built as an entrance to a new basement.

The “Körnerkasten” is one of the largest Roman buildings in Austria and the only example of a box- shaped gate. The remains of two rooms of the Roman Headquarter Building (principia) are preserved under the parish church. In the first room the edificial relics comprise a period from the 1st to the late 4th century when the camp was transferred to the civilian population. Then the Commander’s office was also adapted for civilian use e.g. by the installation of stoves and hot-air heating. The larger second room, however, remained untouched because of its cult character and it largely represents the state of the 3rd century. Here was the Sanctuary of the Flags of the camp, which in the late Roman period probably served for Christian worship. Originally, the colours and standards of the troops were kept here along with a bronze statue of the Roman Emperor, which was worshipped according to the imperial cult. The swearing-in ceremony of the soldiers took place here as well. Fragments of the statue were found during the excavation. The massive stone base, which still rests in its original place is regarded a peculiarity. To the south the room was confined by a large round apsis whose foundations now remain outside the church. 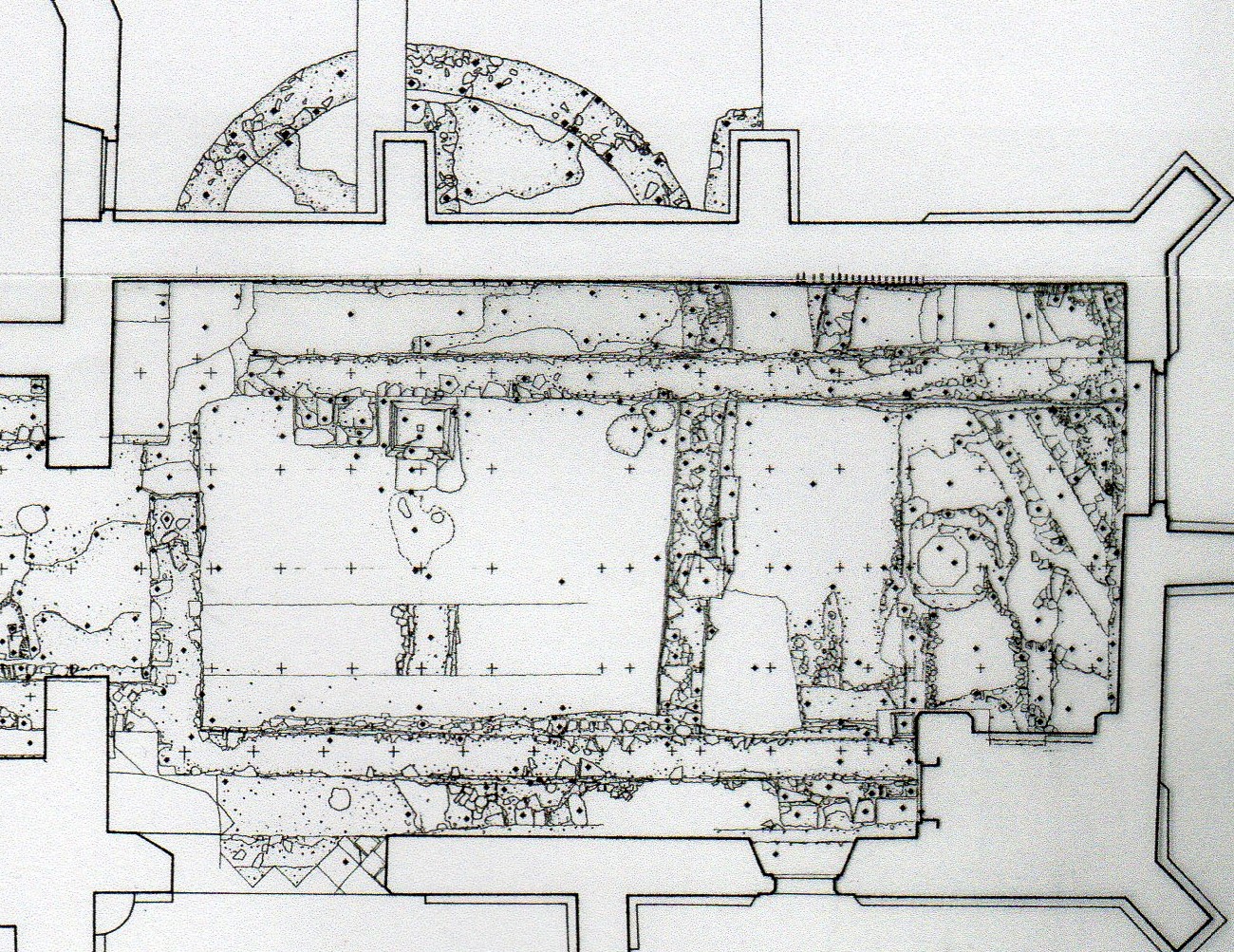 Virtual reconstruction of the Sanctuary of the flags(Fahnenheiligtum) 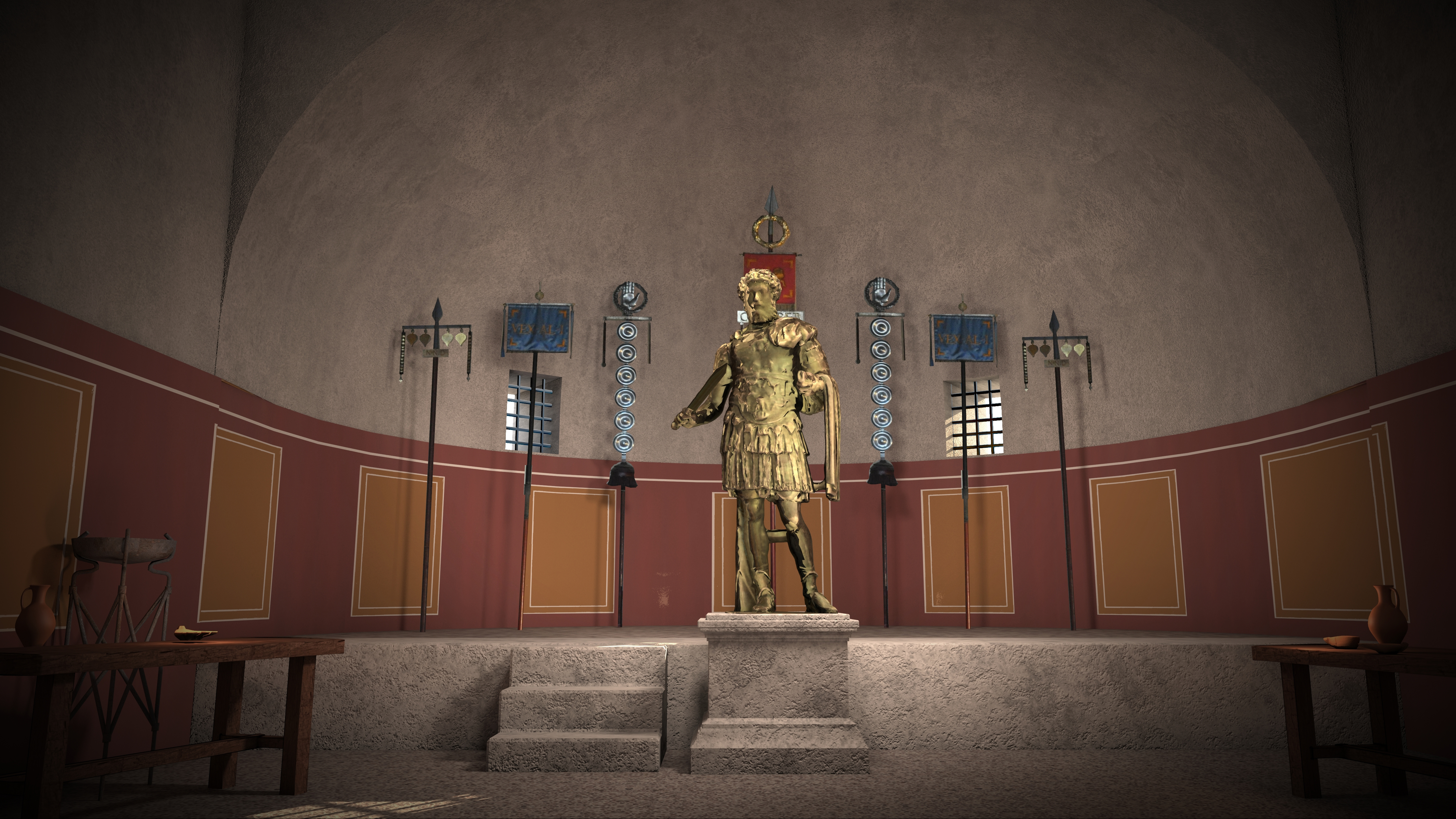 For full presentation of the virtual principia see:

In the course of the 1981 excavation foundations of a Carolingian hall church were also found, which had been erected by Bavarian colonists in the 9th century on the Roman foundations. It was one of the earliest medieval church buildings in Lower Austria.

Along the Austrian Danube Limes only two Roman Banner’s Sanctuaries have survived, under the parish churches of Zeiselmauer and Traismauer respectively. In both cases the names of the villages indicate Roman origin (mauer = wall).

For preservation reasons and because of limited space visits are restricted to small groups under guidance and upon reservation only.

Zeiselmauer has a remarkable inventory of Roman finds. The little exhibition presents a selection complemented by loans from the Kunsthistorisches Museum Wien, the Land Niederösterreich – Archäologischer Park Carnuntum and the Bundesdenkmalamt. All objects are originally from Zeiselmauer and comprise the period from 1st to 4th century. Apart from remarkable small objects the two most important stone-inscriptions of the Roman Zeiselmauer are noteworthy:

Devotion Stone („Weihestein“) which was donated by the II. Thrakian Cohort in honour of Emperor Lucius Verus in 164 A.C. It is the only evidence of the presence of this troop in Noricum. Gravestone oft he veteran Aelius Aemilius erected by his wife with the probably celtic name Amuca. 2nd century. A copy has been placed next to the Burgus. In the room provided by the Community of Zeiselmauer the association “Friends of Zeiselmauer“ (Verein „Freunde von Zeiselmauer“) in 2015 designed this exhibtion and financed it with contributions by its members.

The exhibition is open during the business hours of the neighboring bakery shop. Free admittance.